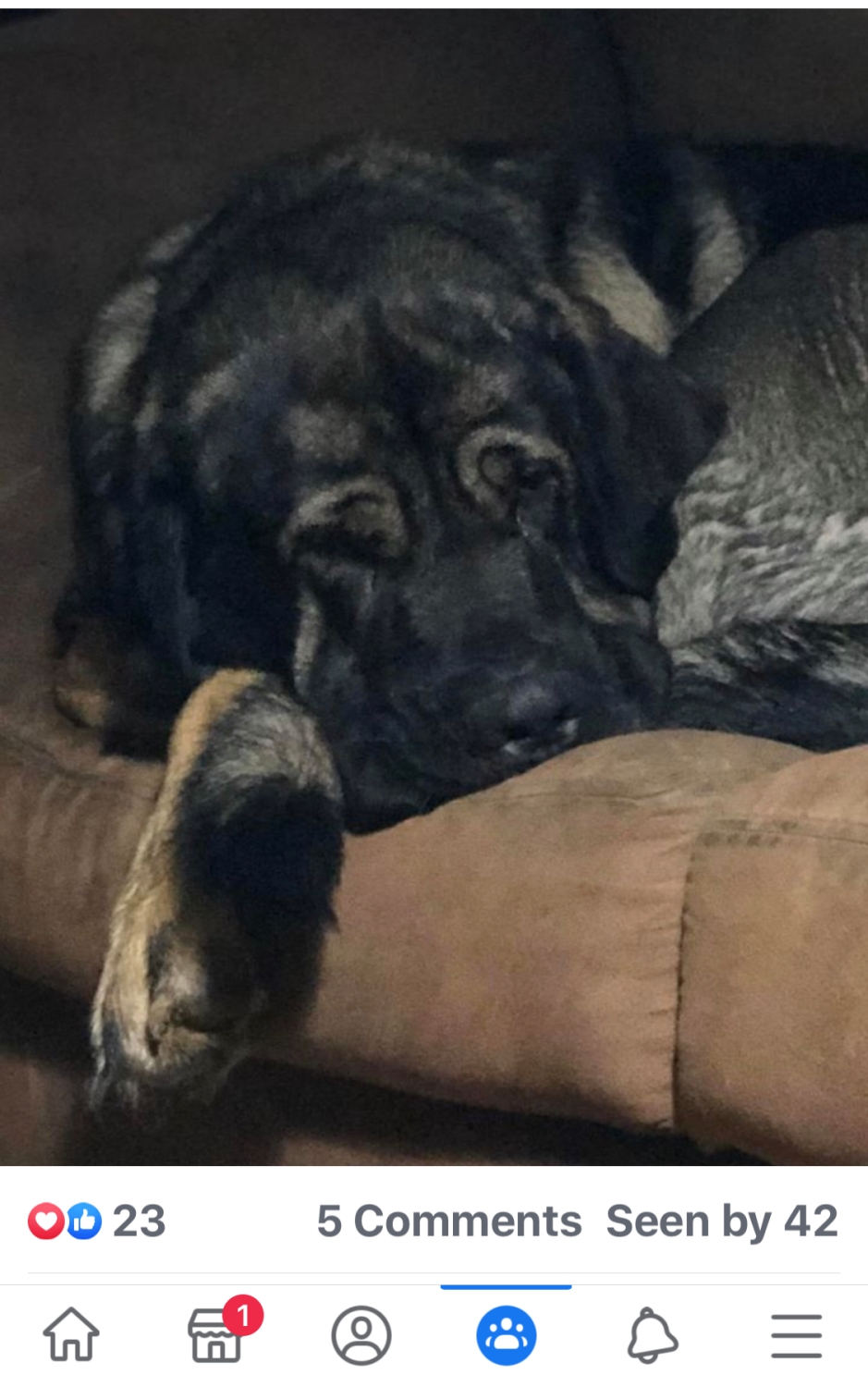 I’m so very proud of Juno! I’m also proud of her owner. She started Juno in the house and went on to take her with her at chore time, when she took her goats on walks in the woods, and generally made her place in the dynamic very clear. This isn’t the first story about what a great protector or nurturer one of our puppies has grown into; I have others and maybe I’ll even get around to posting them some day.  This is what a combination of good working bloodlines and time spent with your dog will get you. As her breeder….this right here pretty much made my week❤️ 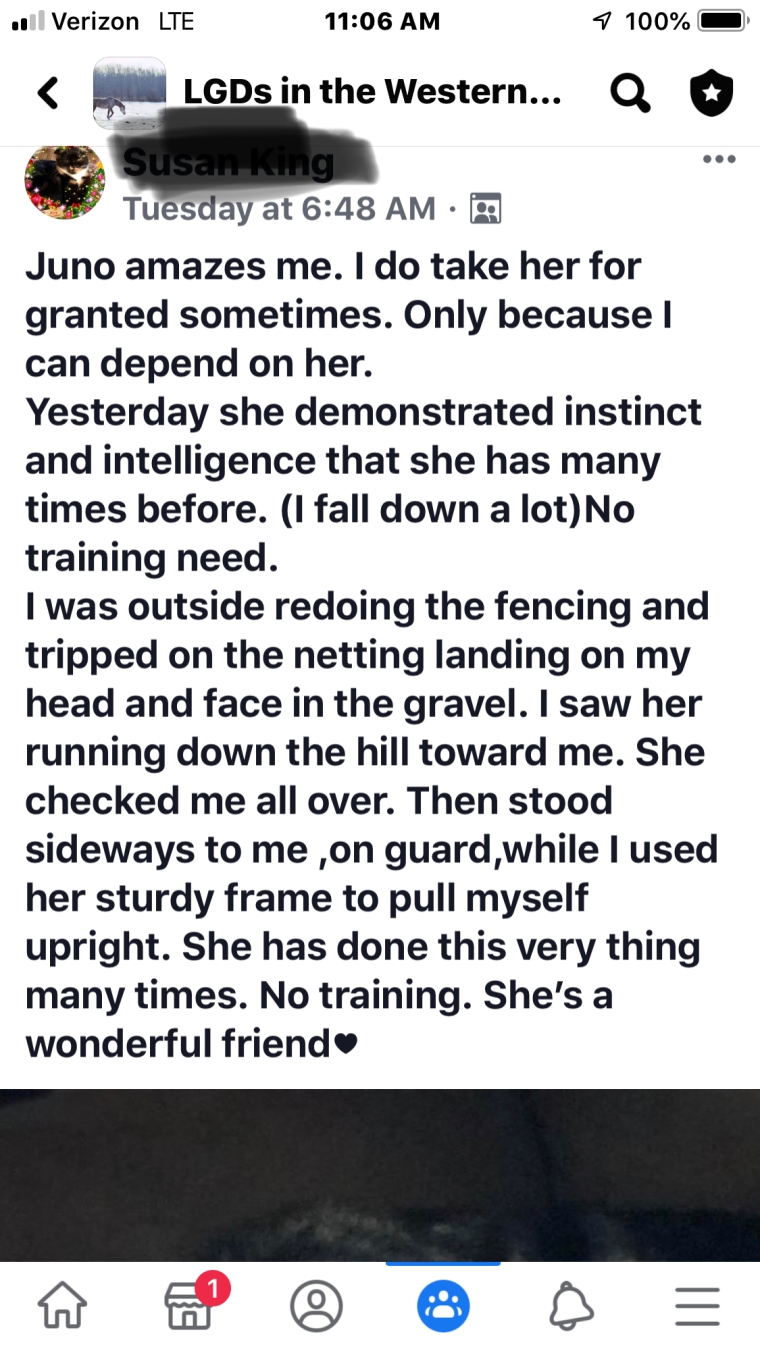 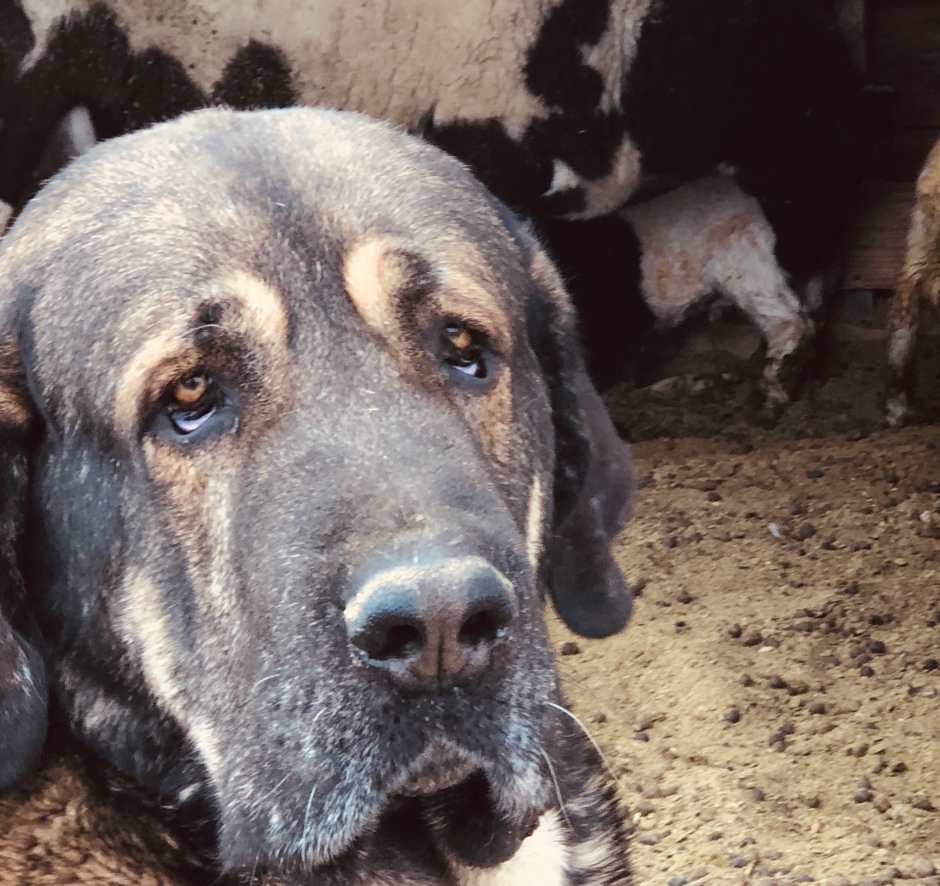 We had a very interesting start to our morning today. Full of sheep drama, and worried dogs. At about 1:30 I went out to check on everyone….all was quiet. I went back in, banked the fire and went to sleep. At 5:30 I woke up to the sound of multiple new lambs crying. I threw on some sweats and some shoes and walked outside. The first thing I saw was two ewes wrestling and head butting each other. Then 3 very newborn lambs mulling around crying, Cabo trying to break up the ewes, and Marcia standing between the fighting ewes and the lambs. Both looked at me as if to say “a little help over here!”

Apparently the two ewes had lambed right next to each other at about the same time. The older ewe had a pair of twins, and knew which two were hers. However, the other ewe, a first time mama at some point after cleaning her baby became confused and was butting her lamb, while trying to steal one of the other lambs. After segregating the new mama and her lamb, she figured it out….and all was peaceful. Cabo and Marcia were very relieved, and Besi went back to sleep, because she’s Besi.

Here’s a video of Cabo demonstrating his chill personality during another labor and delivery….

And one of Cabo telling Marcia in not so chill terms to get away from his ewe and her lambs….they do have their favorites! 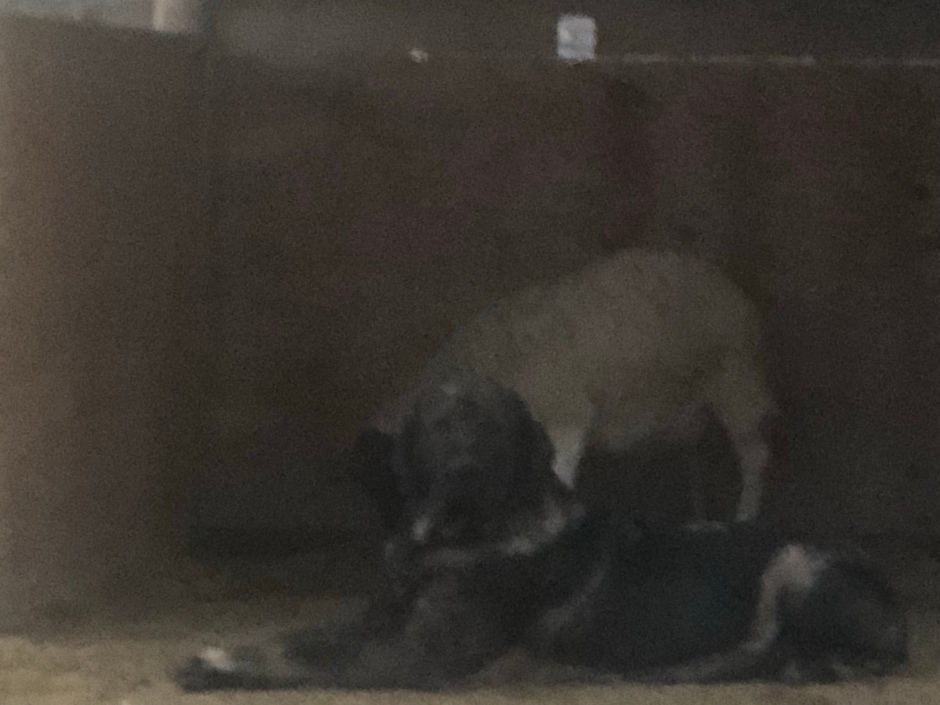 I promised video and photos of Marcia, when I had a chance to watch one of our ewes lamb. It happened at dusk so the quality isn’t great. Notice Cabo and Besi are staying back with me….they’re old hands and know how I feel about invading the ewes space. 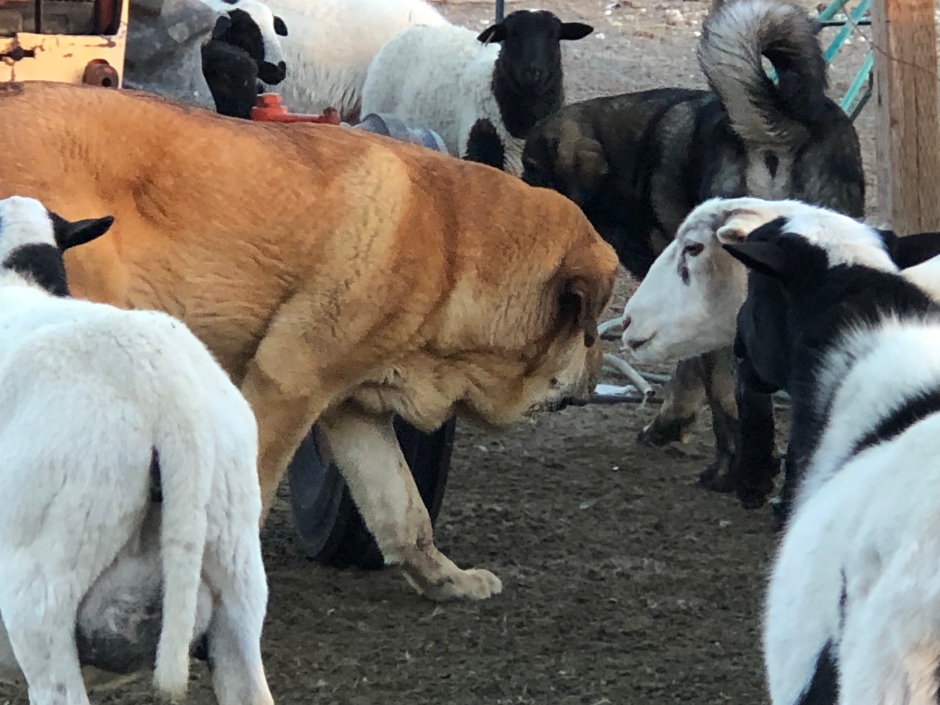 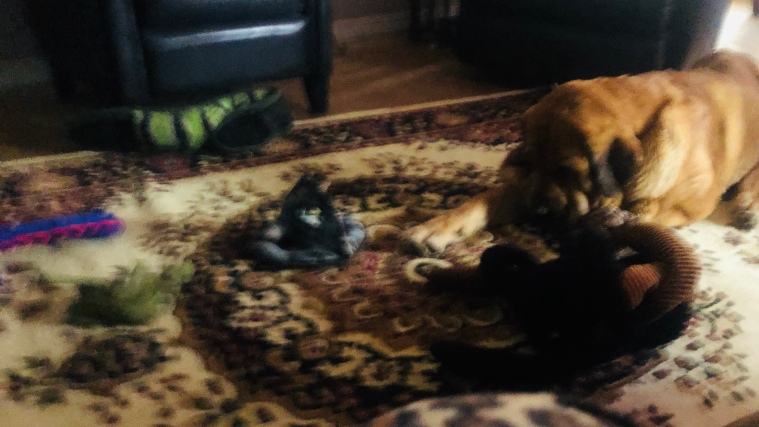 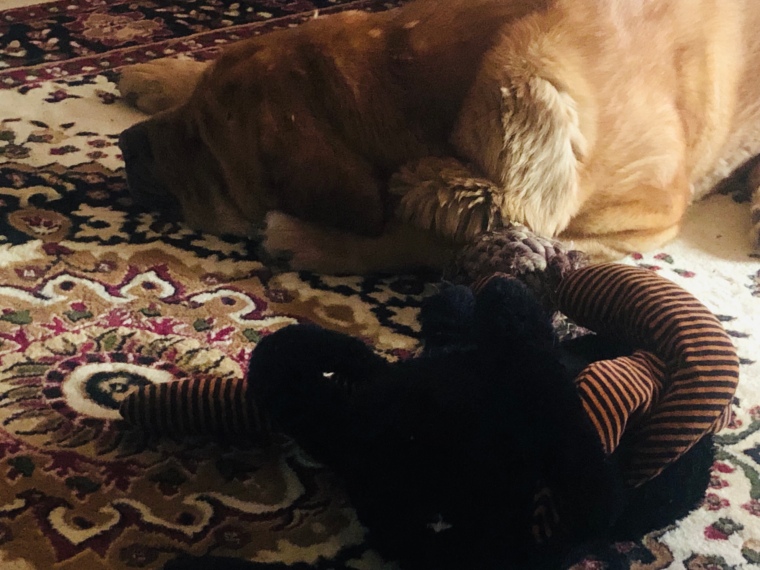 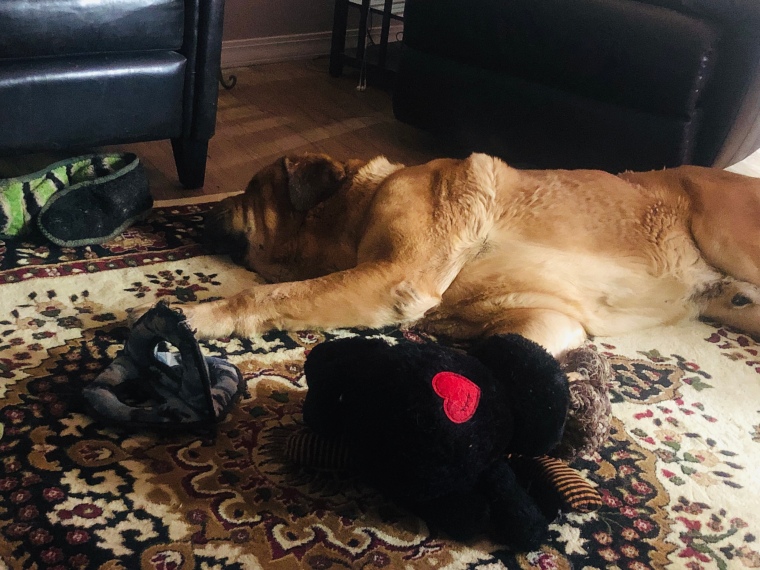 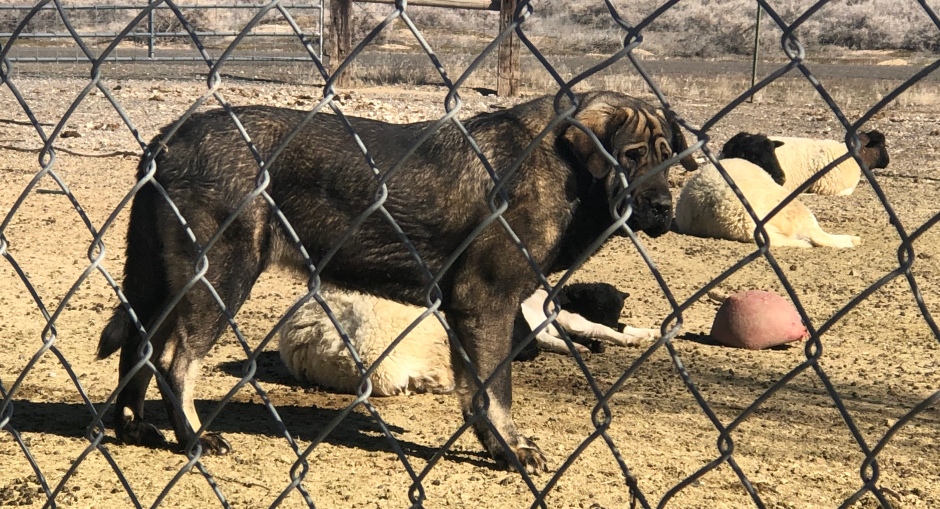 This is Marcia. Marcia was born and raised right here. She, has been trusted implicitly with our ewes and lambs since her first lambing at age one year. During her first year, in addition to learning how to be a good guardian, Marcia learned to be in the house and to have leash manners, how to ride like a lady in the car and that it’s okay to not like obnoxious dogs at the vets office, but it’s not okay to lunge at them for being idiots. During her first lambing, Marcia sat back several yards from the ewes and just watched. I imagine it was a little bit of a shock to see a squirming, crying, lump of life covered in a potentially tasty snack drop out of one of the ewes she’d been living with her whole life. So Marcia sat back and waited and watched, taking her cues from her human and her pack. I have no idea why Marcia is Marcia. I don’t believe I can take credit for her raw reactions to unexpected situations. I think this is the result of centuries of selective breeding, and okay, some of it from her training and just time spent with her. This is also why, despite the obvious hip issues in this breed, I will never again cross with another breed. Call me selfish, but I want the Spanish Mastiffs inherent traits to continue. Currently, the number of really great instinctive, discerning guardians seem to outnumber the not so good within this breed. I’d like to keep it that way. I’ve seen what has happened to other guardian breeds and I think it’s criminal to hear about breeds who are known for wandering, or barking too much, or who can’t be trusted with livestock until they’re two years old, and to know the fault lies squarely with us….with people and their egos and greed. Currently, I’m watching Faith and waiting to see her yearling reaction to lambing. Faith shares a father with Marcia, and has been raised the same way. We’ve only had one lamb so far, Marcia told her half sister to stay the hell away and Faith walked out a few yards and laid down, good girl! I can’t wait to see what the next few days bring….and yes, I’ll try to get photos.

In this video Marcia is doing the same thing she’s been doing for the past two days. Sitting close to this ewe and her lamb. When they move, Marcia moves. She doesn’t threaten her mom and dad when they walk by, she just sits and watches. I’ll be interested to see what she does when a couple ewes all lamb the same day..last year, she didn’t do this until the final lamb was born almost a week after the rest, once the lamb was coordinated enough to keep up with the others Marcia went back to just guarding the flock. I know, I’m a dog nerd…. 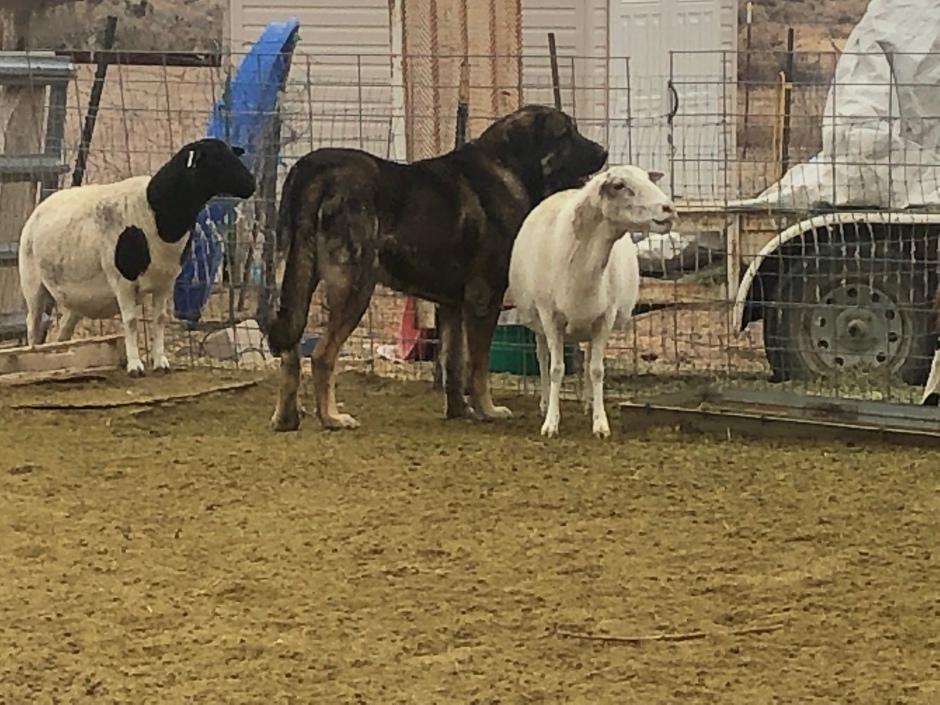 Because we have gained several adolescents over the past several weeks; we have had to up our game a bit with training. Spanish Mastiffs are instinctive and nurturing guardians when bred properly, so they are characteristically easy to work with. However, when training multiples to go into their new homes as well started guardians, you cannot be everywhere at once to stop “fails” before they occur. While my adults dogs and older ewes do a great job reprimanding puppies, I don’t expect them to carry the entire burden with several large adolescents. This is where tethering can help. Yuta and Bella have both spent several days in with the sheep and they’re doing a really great job. If it weren’t for the fact that my ewes are due to lamb this week, they would be loose. However, these girls are very young, they haven’t been here long enough to be completely trustworthy as some of the pups who were raised here have been, and lambing is a stressful time for young dogs. In order for Yuta and Bella to remain with these ewes during lambing, I chose to tether them to prevent any fails. They find the entire process boring, but that’s sort of the idea! I’ll be interested to see their reaction when lambing begins. 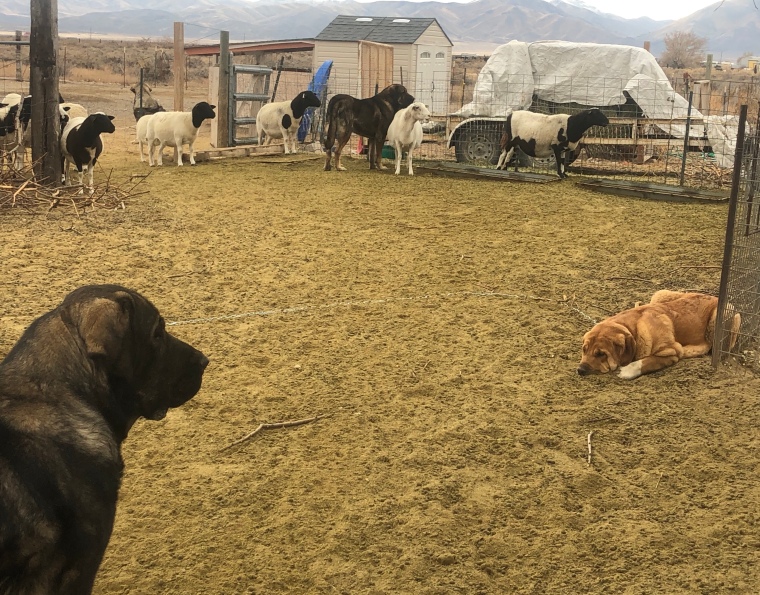 Bella displaying the proper way to behave when the sheep stroll by. 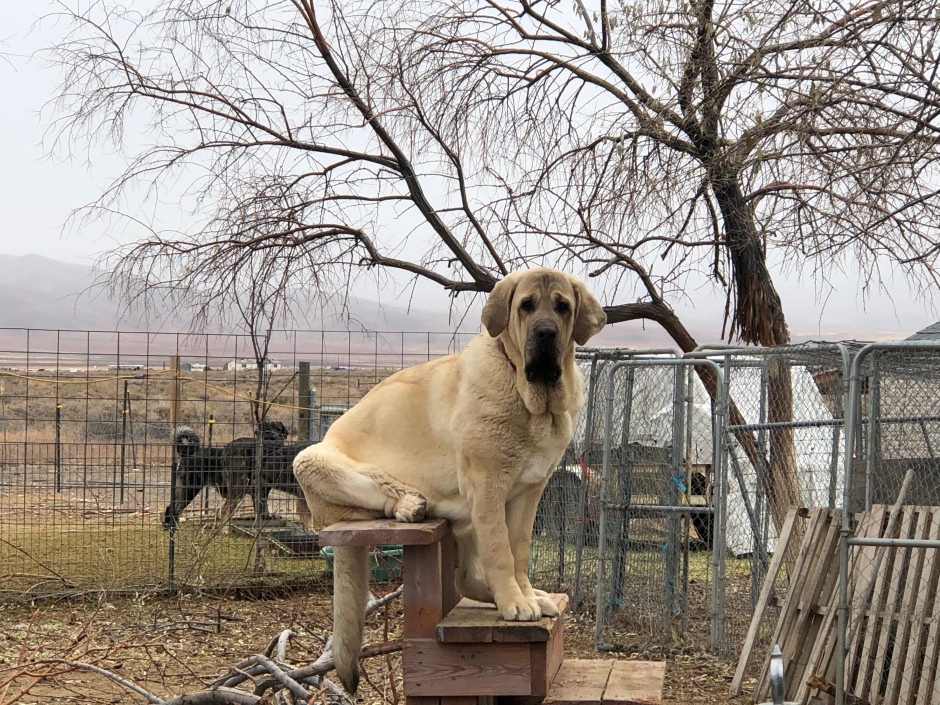 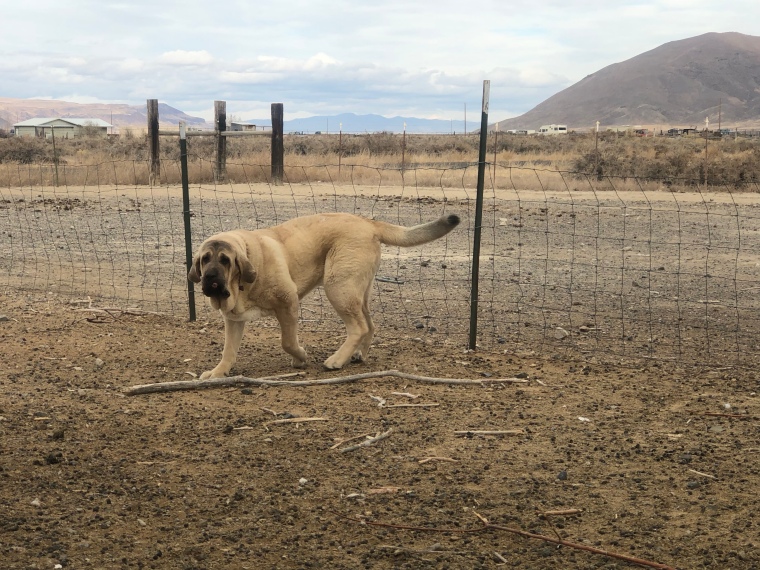 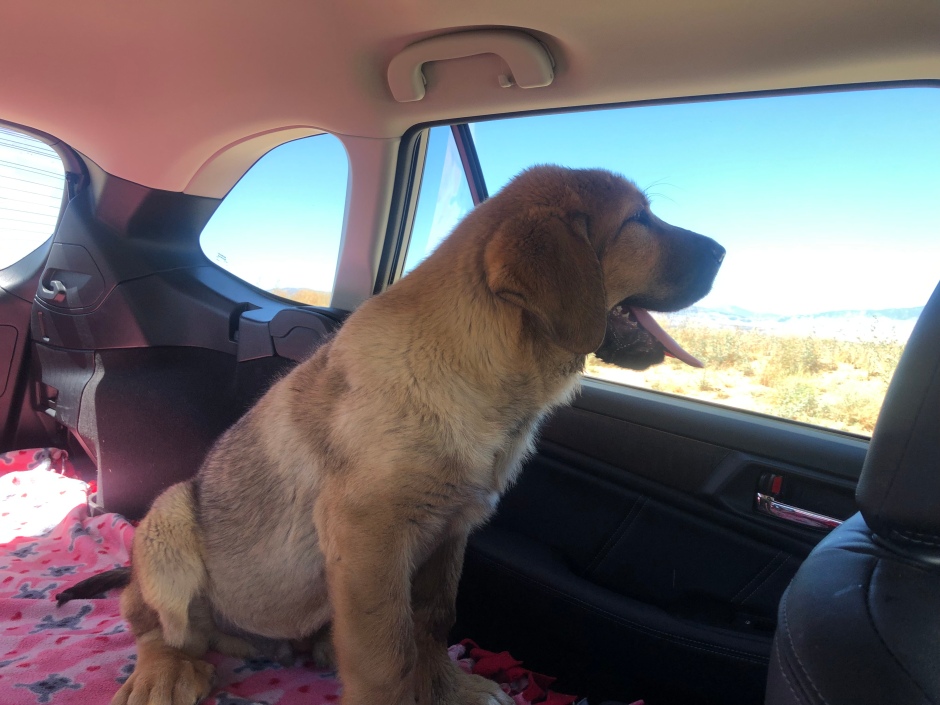 While we’ve always advocated starting our puppies in the house and establishing a strong bond between family and LGD while also teaching basic manners and of course including our puppies in daily routines and chores; we have not made a practice of outside socialization. We have decided to include this very important part of raising a confident dog with well developed discernment skills in the future. So, here is Tomas on his first outing. I think he had a good time making new friends! 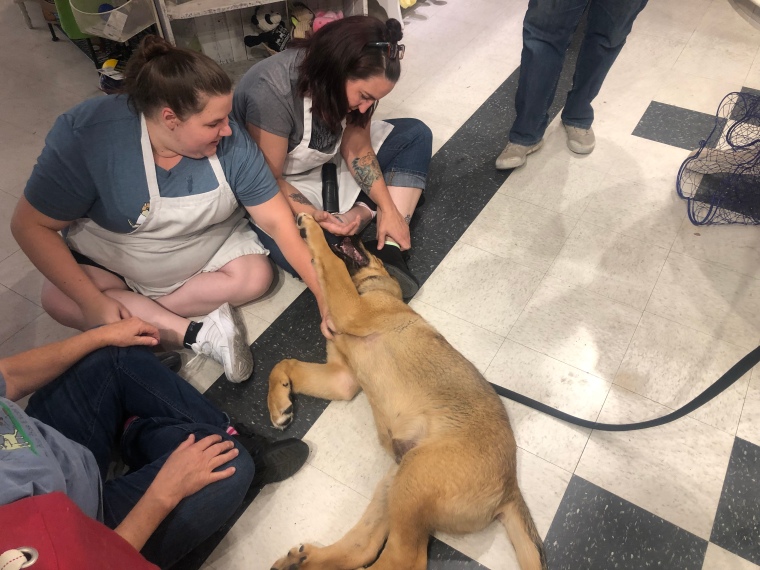 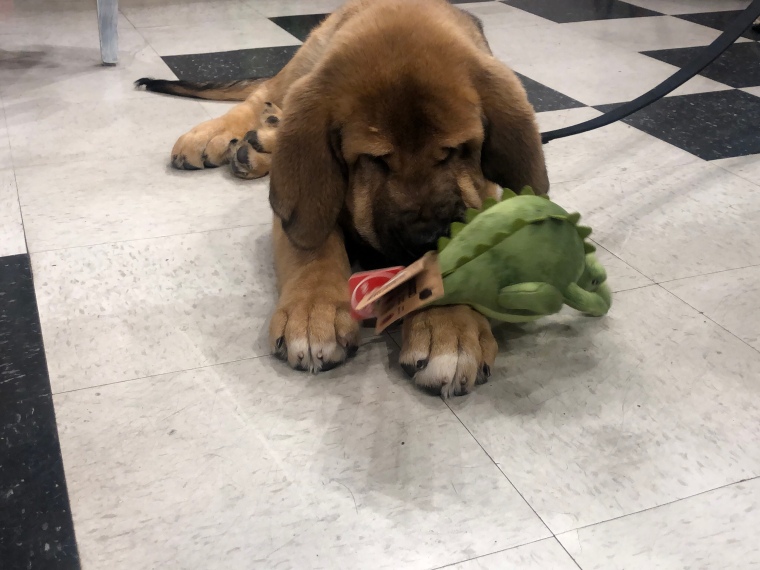 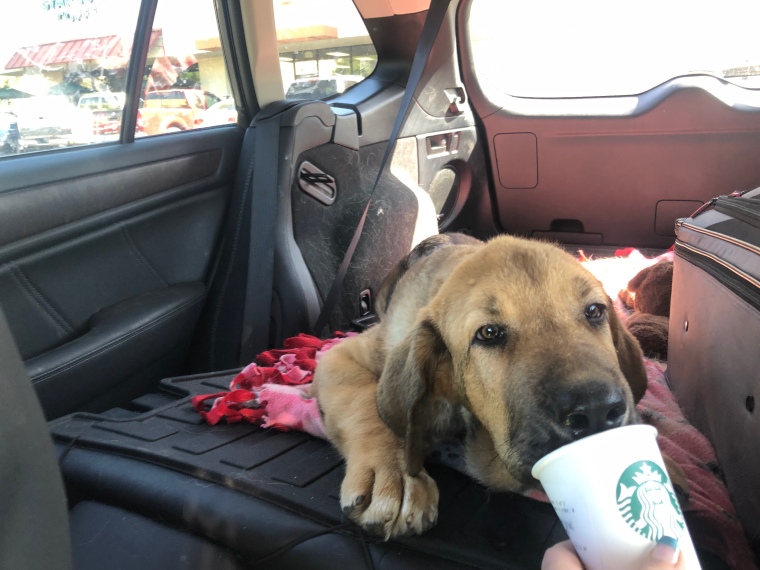 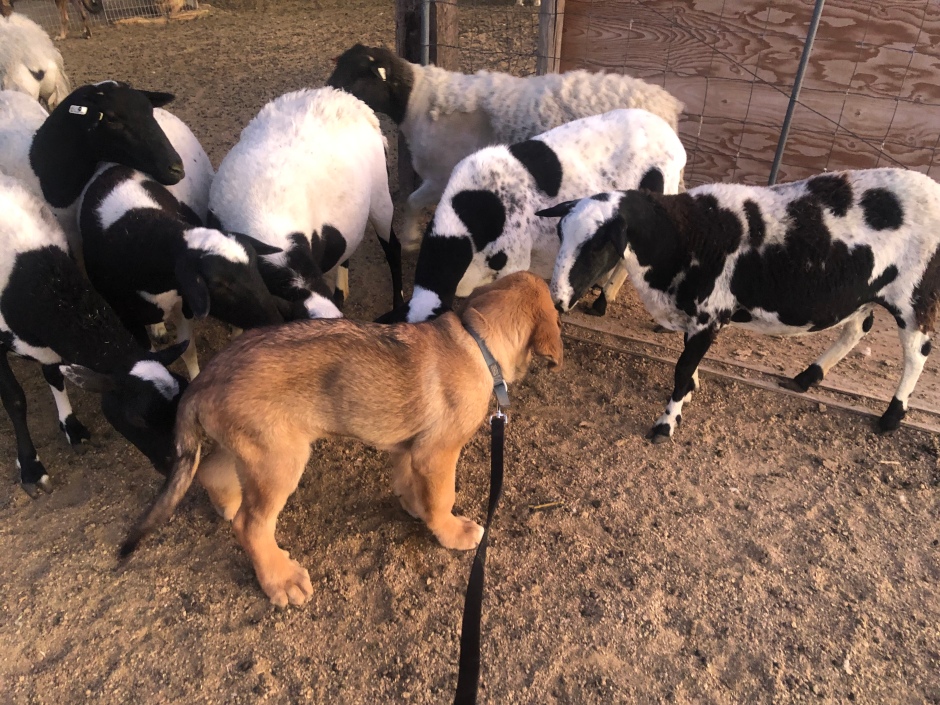 Tomas is a pretty smart little guy. Notice the body language? Everything about his posture tells all the other animals that he’s not a threat, but he never lost his nerve and ran away. The dogs have been through this enough times now their reaction is pretty predictable. “Hey new little guy what’s up? Okay gotta get back to work see ya!” I love my dogs❤️

Later, in the afternoon, he spent some quality time harassing Josin….yes Josin is a saint! 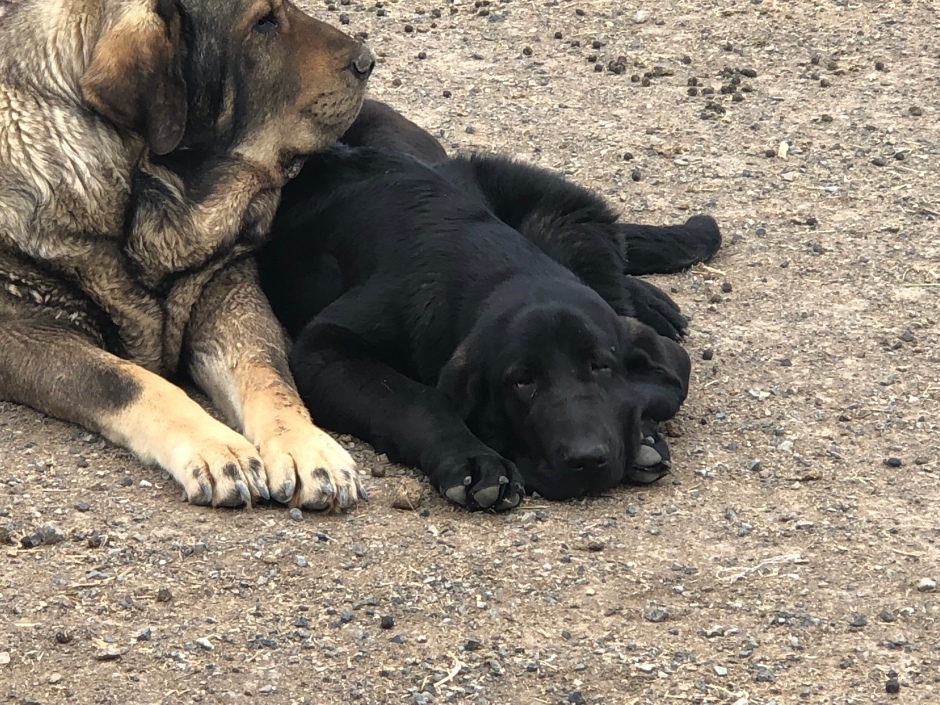 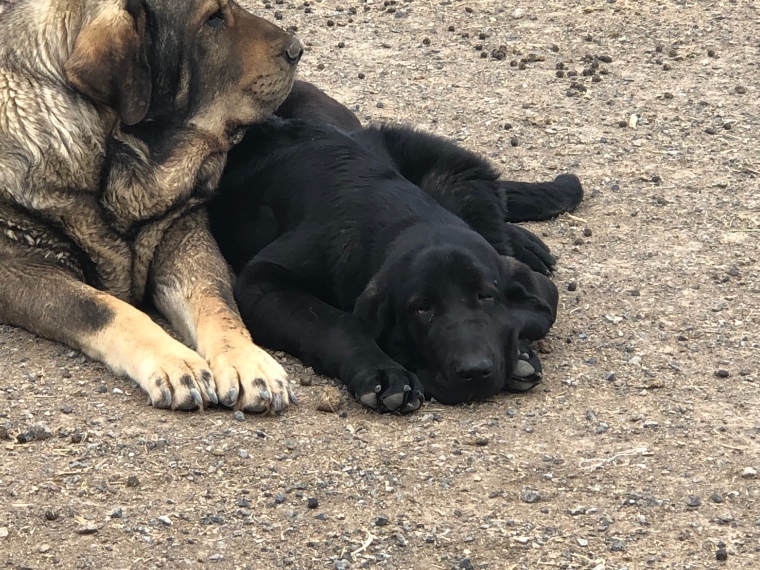 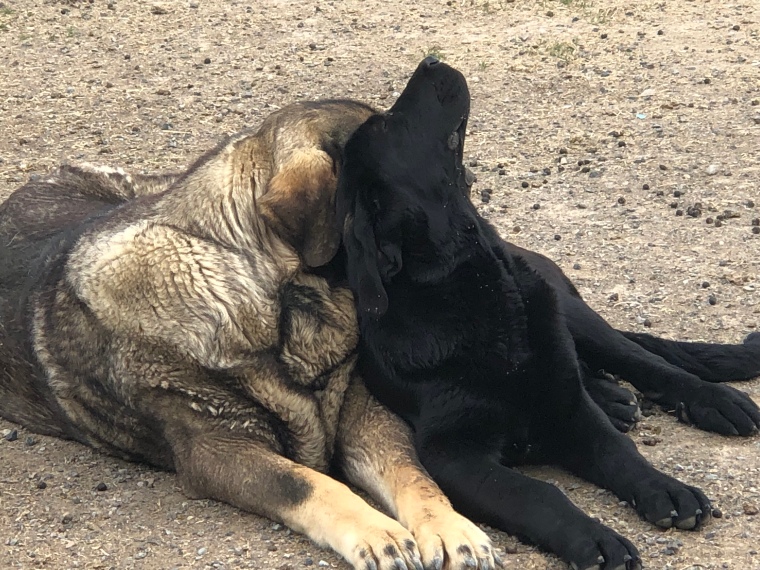